It’s been a while since my last post.  I took a holiday and went to Italy for 5 weeks.  It was completely awesome and gave me a lot of time to think about a lot of different things.

Whilst I was away a had quite a few crazy ideas, and this was one of them…. a custom compressor based somewhat on the API 225L:

My idea however is to take it further than the original, much much further.  In fact it will probably more resemble the API 2500 when it’s finished:

I had to start somewhere – so I began by breaking down the problem, as I always do, into manageable chunks of work.  The first was the famous API2520….

One of the key components of all of API’s gear is their Discrete Operational Amplifiers ( DOA’s they are called ).

In particular, the API 2520 ( image courtesy of http://www.silentarts.de/ ) DOA is extremely well known in audio circles and a key component in “the API sound”.  So to begin designing this project I knew I had to start there.  There are many commercial options out there for API 2520-style DOA’s, from kits, to full clones, or even buying directly from API themselves.  After a lot of investigation I found the best option would likely be one I’d already used before – the gar2520 by Gary Barnett of Barnett Industries, which I discovered as an optional extra with Jeff Steiger’s ClassicAPI kits.  In particular, I remembered it from one which I had already built; the VP26 microphone preamplifier.

After some more investigations I quickly realized that the 8-10 2520’s I would need to buy to both test and then finish the compressors ( I intend to build 4 of them ) was going to be too high.  So I decided to do something a bit crazy and see how much it would cost me to find the original circuit on the internet, tweak it, source the parts myself, do a custom layout of the circuit board, and then try and build it….  At the very least I thought I could build some test devices, and then once the compressor design was finished I could replace them all with the gar2520’s ( because I know they are of such high quality ).

The cost difference for me was quite compellingly in favor of jumping in the deep-end and building them myself – so that’s precisely what I’ve started to do.

Firstly I built the circuit in LTSpice ( based on the “original” I found here http://www.waltzingbear.com/Schematics/API.html, along with various modifications and observations through many many hours of online research and forum snooping! ) and simulated it, tweaking the layout and component selection for parts I could source directly and quickly in Sydney, Australia, from element14 ( I think I only ended up having to change one resistor value since they didn’t stock it…. ) and ended up with the following: 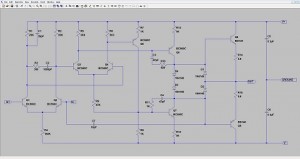 From there, I rebuilt the schematic in the free version of Eagle PCB, and came up with a PCB layout that was single-sided ( for ease of CNC-routing ) and matched the original API 2520 size and footprint: 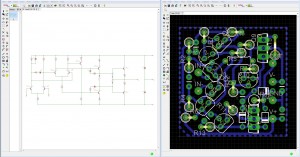 From what I can tell, this might be the first single-sided PCB layout for a 2520-like circuit that doesn’t use links or off-board wires to complete any of the circuit paths….  If so, then I’m pretty proud of it!

From there, I took these files ( after a good friend of mine, and PCB-making-expert – talsit – checked them for me ) to Robots and Dinosaurs ( a Sydney Hackerspace ).  The CNC machine they have there is completely awesome.  Even though this was the first time I’d ever used it ( I must have just gotten lucky…. ), after loading in the files, and asking Gav ( Robots and Dinosaurs supreme resident hacker! ) a lot of questions, I got straight to it, and the result seems pretty text-book….

Here was the progress after the first layer, which eagle labels an “etching” layer: 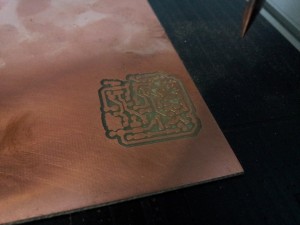 Secondly the holes get drilled: 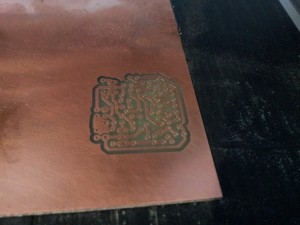 Then the board is “milled” out to become its own entity: 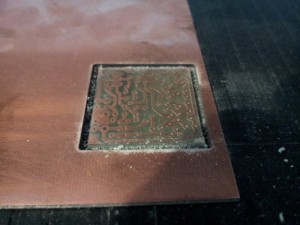 And here is the result – a rather nice little amplifier PCB ready to be populated: 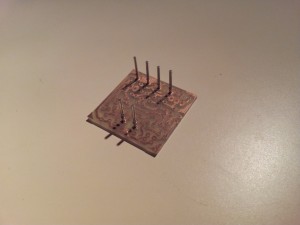 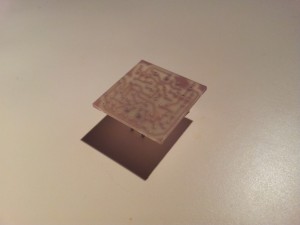 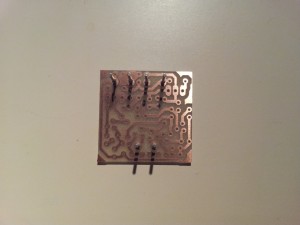 More to come soon ( hopefully in a couple of days ), when I actually populate the board and do some tests to see if all of my pre-planning has actually worked….